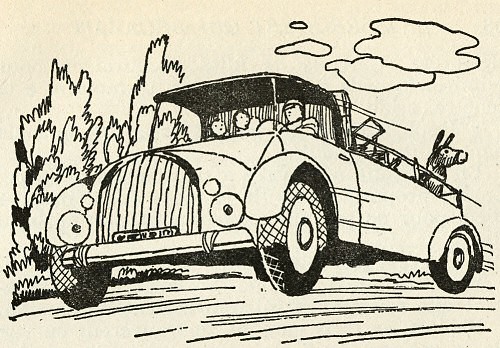 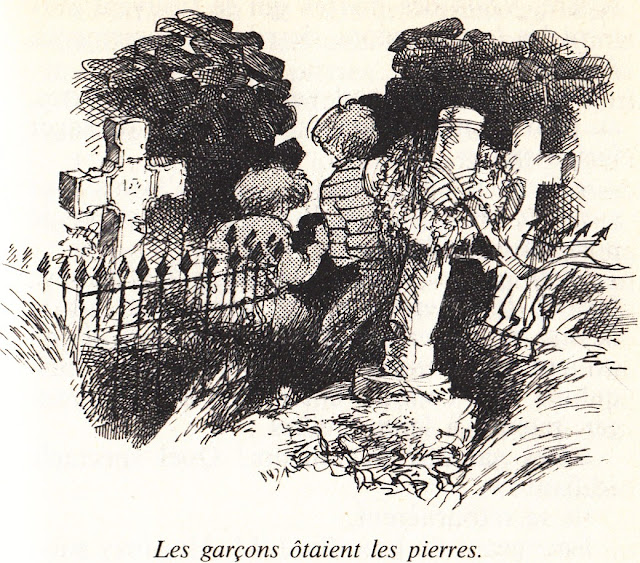 Boiry, 1981.     "Come on, Jupe, give me a hand," [Pete] gasped. "We haven't got much time. This fog is going to be a zinger."   Jupiter joined him and both boys started lifting stones from the centre putting them into a new pile farther from the wall, and going back for more. They were burrowing deeper and deeper into the heap of stones when they heard a voice with a French accent behind them. Jacques Poirier, 1967.   "I do like to see boys who don't mind working," the voice said.   They looked up from where they were working, crouched over the pile of stones. Out of the swirling fog came the debonair Mr. Huganay, followed by his two henchmen, Adams and the big bruiser, Lester.   "However," the art thief said, smiling down at them, "I think it is now time for us to take over. Men - grab them!"   Pete and Jupiter, coming to the same decision at the same moment, both bolted to get past the three men. Unfortun
Enregistrer un commentaire
Lire la suite 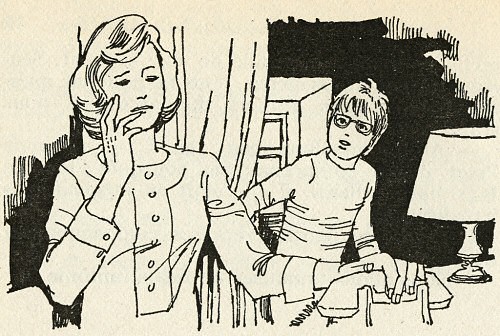 -Mr. & Mrs. Andrews/Andy, les parents de Bob - 1ère Partie.  Dans le Chapitre 4 de The Mystery of the Stuttering Parrot / Le Perroquet qui bégayait on retrouve une scène quasiment identique à celle du début de The Secret of Terror Castle / Au Rendez-vous des Revenats . Elle n'est malheureusement pas illustrée.   "Bob Andrews was eating his supper, in between glances at the telephone. He had been expecting it to ring any minute, ever since he got home from the library. [...]   But he was on dessert now - baked cup custard with a nice brown crust on top - and though he was scraping the last speck from the side of his dish, the phone still hadn't rung.   However, his mother, slender, brown-haired and attractive, caught his glance this time and seemed to recollect something with a start.   "My goodness!" Mrs. Andrews said. "I forgot. There was a message for you. Your friend Jupiter Jones called."   "He did?" Bob excla
Enregistrer un commentaire
Lire la suite 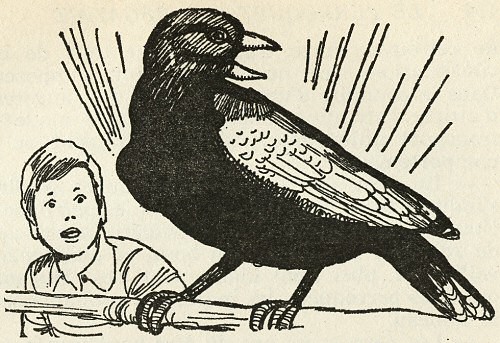 Madeleine Prévost, 1977.   Suite à un échec cuisant, à savoir le vol de la majorité des perroquets par Huganay, nos trois amis détectives, enfermés dans leur Quartier Général, sentent le désespoir les envahir. Leur enquête semble se terminer là... lorsque Blackbeard, le mainate malicieux, se fait entendre: Jozef Cesnak (illustration slovaque).   "Another silence ensued, broken only by Blackbeard's noisy eating of sunflower seeds. At last Bob sighed.   "If only we could have made Captain Kidd, Sherlock Holmes and Robin Hood talk when we had them all together," he said. "At least we'd have the whole message."   "Robin Hood." Blackbeard cocked an eye down at them. As usual, he seemed to be listening to everything. He flapped his wings.   "I'm Robin Hood!" he said clearly. "I shot an arrow as a test, a hundred paces shot it west."   Three boyish faces turned to stare up at the bird in his cage.   &qu
Enregistrer un commentaire
Lire la suite 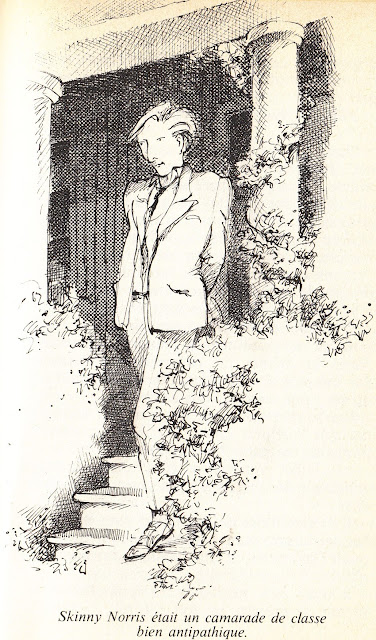 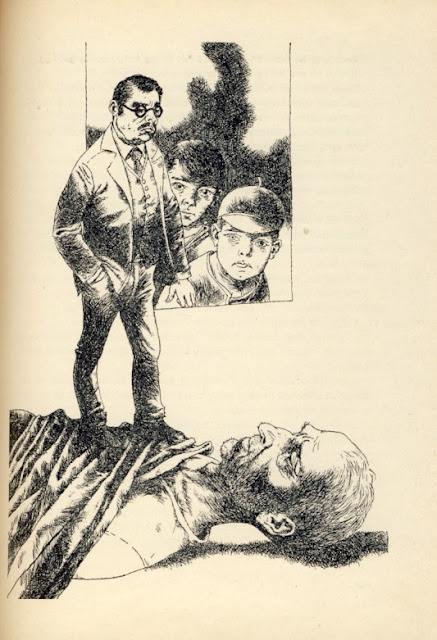 Suite aux informations que Carlos leur a fournies, les détectives l'accompagnent dans le quartier défavorisé où il habite avec son oncle. Le jeune mexicain encore tout joyeux de son trajet dans la luxueuse voiture conduite par Worthington/Warrington tombe malheureusement sur un M. Claudius tenace et agressif. Jupiter/Hannibal et Peter viennent à la rescousse:   "As they were talking, they approached the rear of the house. In the road beyond the house they could see a car parked. It was an ordinary black sedan of popular make, but Carlos scowled.   "Who calls on Uncle Ramos?" he asked. "I do not like this."   He began to hurry, and Pete and Jupiter ran after him. As they came closer to the tumble-down shack they could hear a voice raised inside - a loud, angry voice.   "That's Mr. Claudius's voice," Pete said.   "Tell me!" Mr. Claudius was shouting. "Tell me, you old idiot, or I'll wring your neck!" I
Enregistrer un commentaire
Lire la suite
Autres articles